If prescription medications aren’t for you, and you’re seeking an alternative treatment then low level laser therapy (LLLT) could be right for you. LLLT has emerged over the last 10 years as an effective treatment to combat hair loss in both men and women. It has proven to be a viable alternative to the only two FDA-approved drugs for hair loss, Finasteride and Minoxidil. 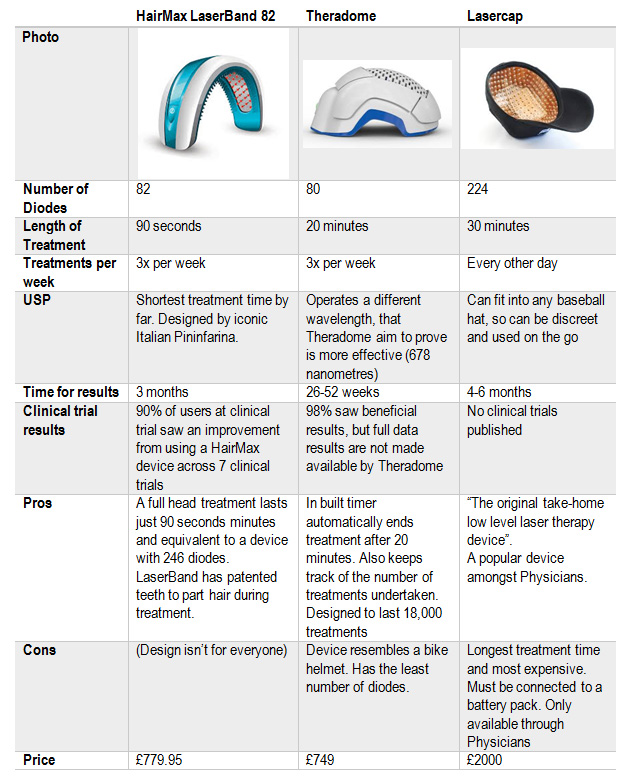 However LLLT will not have this effect on every single individual, as the effects depend on the ability of your intracellular molecules to absorb the laser light. Studies have also shown that LLLT is most effective when used as part of a combination therapy with either Finasteride or Minoxidil.

HairMax is our low level laser therapy (LLLT) device of choice, as they provide the quickest and cheapest options available on the market. HairMax’s studies have shown great results with 88% of patients showing significant improvement when their Lasercomb device was used in conjunction with a drug treatment. They also found that their devices displayed efficacy until the end of their 24 month clinical trial.

HairMax launched their latest device in January 2017, the Laserband 41. This device is smaller version of the Laserband 82, and shares with it all of its benefits. The Laserband 41 is a 3 minute treatment, and is equivalent to a treatment of 246 lasers.

As well as the Laserbands, HairMax also make a handheld device called the LaserComb. This device comes in either 12 or 7 diode varieties with RRP for these devices starting at just £169.95. While treatment lengths increase to 8 and 15 minutes for the handheld devices, they are still quicker treatments than their competitors and much cheaper.

As with other hair loss treatments, it is normal to see an increased level of shedding initially. Perseverance with the treatment will see the shedding reduce after the initial loss.

The Difference between Marine and Bovine Collagen

When it comes to Collagen Supplements, you may not realise...

One of HairMax’s most popular Low Level Laser devices, the...

We are pleased to be adding Proto-Col Clinical products to...

Categories
Archives
2021
2020
2019
2017
Products
We use cookies to ensure that we give you the best experience on our website. If you continue to use this site we will assume that you are happy with it.OkRead more